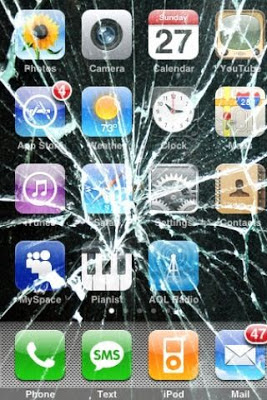 As a kid, the notion of a cell phone or tablet computer was science fiction for me. It was the 1970s, and telephones were attached to the wall or sat on the table, had a cord and a corded handset, used a crappy bell as a ringer, and had a rotary dial instead of push buttons.And if you had to make a call while you were mobile, you hunted down a phone booth. Never seen a phone booth or payphone? Google it.

Now we take our phones everywhere we go and they do everything our desktop/laptop PC's can do, plus take pictures & movies...and they even make phone calls too. My iPhone has more technology in a box the size of a pack of smokes than what sent man to the moon the year I was born.

The cell phones of just a few years ago were, in my opinion, less fragile & more rugged than the shiny glass wonders we carry now. Back then, a phone case wasn't so much for protecting your phone but more rather a means of conveyance, something that attached to your belt or pocket and carried your phone till you needed it. Then along came the rubber sleeves for Blackberry and RAZR phones which offered a modicum of protection as they collected lint and got caught in your pocket. Belt clips, which broke non-stop, and faux leather pouches became passe, going the way of the fanny pack, and we just shoved our unprotected phones in our pockets again.

The game changed completely when the iPhones hit the stores. Yeah, they could do magical things but if you looked at them too hard they'd shatter and you were out five bills. Thusly, it has become necessary for a cocoon to protect your pretty toy.

The new redesigned RAZR/RAZR Maxx is pretty robust with its Kevlar and Gorilla Glass, but I'd still want to cover it. And there's no way I would ever even consider leaving an iPhone or a Samsung Galaxy naked to the elements. Same with an iPad or a similar tablet. You've got better things to do with your hard-earned ducats than to waste them replacing your electronics.

So unless you have an unlimited supply of money to replace broken phones and tablets you're gonna need a cover/case. There are tons of them out there, mostly decorative and offering little in the way of true protection from the elements. And then you have what I call The Big Three.

The King of the Cases, the biggest name out there and the one most people seem to lean towards, is OtterBox. They were the first true protective cases I ever saw for smartphones, and they come in a wide variety of styles. Some look to be more stylish than protective but even the lowest rung on the OtterBox ladder gives a decent measure of protection from your clumsiness. I personally have never owned an OtterBox but Mrs. Wingman has had a plethora (she goes through phone cases like she goes through handbags) and swears by them. The Commuter series of cases is stylish while the Defender series is more burly.

Another good choice is Incipio. I tend to feel their cases lean more towards the stylish but a couple of them have a really neat feature; internal storage. Say you're headed out for an activity where you may not want to carry your full wallet, like fishing or a day at the beach, or maybe chillin' poolside. Or, in a big frikkin' crowd like Mardi Gras or a packed football stadium where you have a genuine chance of getting your pocket picked...Carry your phone in your FRONT pants pocket where a pickpocket has a much harder chance of lifting your goods, and if you have an Incipio case, you can piggyback your license, a credit card, and a few bucks inside it. They have two models, the Stowaway and the Stashback, that have flip-open compartments that covertly carry your bare essentials. Of course, Mrs. Wingman has a Stowaway, which she'll use in lieu of carrying one of her myriad handbags when we hit a hockey game or similar crowded event.


As for me, I'm particularly hard on phones. I've replaced phones due to dumbness like dropping it next to the car in a pouring rainstorm and then running it over. I work in an industrial environment and had a phone fall out of my pocket and end up drowned in a puddle of hydraulic fluid, water, and other nastiness. Now that carry a glass wonder iPhone I have it firmly ensconced in a Griffin Survivor, which I purposely picked because it was tested by both the UK and US military and has actual MILSPEC numbers.

Yes, it's chunky and a bit bulky. Yeah, it's hard sometimes to get it in and out of a pants pocket. The flap over the camera lens is a bitch. The belt clip is prone to snapping off which is why I stopped using it. But my precious glass iPhone has survived a drop into another shallow puddle of nasty after falling to the concrete, and survived a more than five foot drop off an inside loading dock to the concrete outside the building with no damage to either the cover or more importantly the phone. And THAT is why I use the Griffin Survivor.

Sure, if you're smart your phone has insurance from your carrier that's tacked onto your bill every month but the deductible on a super-phone is higher than that of the cheap-assed LG you used to carry three years ago. And then they'll probably send you a refurbished phone that someone else effed up first and sent back, so chances are your replacement phone will suck. Skip the hassles. Skip the higher cost. Invest in your investment and use protection. You'll thank me later.